I’m not entirely sure why this is happening. I think it’s a delayed reaction to my mother’s decline into a nursing home. Many of my friends are going through loss or serious health crises. The deaths of so many musical icons that seemed as if they would live forever. The terrible shootings across the country. Recently, right here in my city, the murder of child so brutal it’s making international news.

What a rambling intro. And what the hell does it have to do with the title of this post? 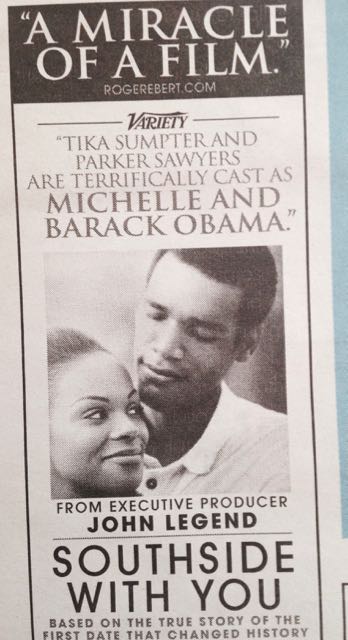 Just that when I first heard about the movie Southside With You, which wasn’t until the Friday it opened, I thought “Oh, this is exactly the kind of movie I want to see.”

Then I burst into tears.

What is wrong with me?

I looked up some reviews. Rolling Stone led with “Here’s the date movie of the year. Southside With You is also about a date, a first date in the Chicago summer of 1989.” I cried.

The line from The New Yorker review: “The easygoing yet rapid-fire dialogue—and the actors’ controlled yet passionate delivery of it, as they get to know each other, size each other up, and make each other aware of their motives and doubts—evokes the pregnant power of the occasion,” made me cry even harder.

Apparently, for whatever reason, I needed to see this movie stat. If I could just stop crying.

My friends wanted to see the movie Sunday night, but Sunday night is my hole up hermit like in my little castle before returning to work on Monday night.

So after I soaked my head bone with a hot washcloth, and finished writing the next scene in my current WIP, I drove myself to the 9:30 showing at the theater downtown.

The only other people in the theater lobby, besides the security guard, the concession worker, and the ticket seller was a family of three going to see Kubo and the Two Strings.

I figured, everyone else going to the movies here tonight have taken their seats already.

I walked into the theater room for Southside With You, and there was nobody else in there.

It was this surreal moment where I could have felt ALL ALONE.

Instead, I bounded up the steps to the top row, my mind crowing MINE. ALL MINE.

Which meant I had plenty of room to dance in my seat when Barack was cruising down the street as Janet Jackson’s “Miss You Much” played on his car radio.

And I didn’t annoy nobody when I kept pitching forward in my seat to get a better look at the Ernie Barnes art.

But then, it also meant I couldn’t nudge Dia and say “See? Michelle never watched Good Times either. I want my black card back.”

And I couldn’t excitedly slap anybody’s arm over the WTF, Twilight Zone moment of watching a scene in the movie that is eerily similar to the scene I was struggling with and finished writing just last week in my WIP—the date that’s not a date in a freaking art museum.

Nor could I put my arm around my friend T and say. “This is what’s happening, girl. We’re finding you the thinking man’s version of the smooth talking brother.”

On my drive home late that night—I mean, there wasn’t even anybody left to check my validated ticket when I exited the parking garage—I teared up again. I think part of the reason for my tears is that Southside With You is a magical day story, a first date that is the beginning of destiny kind of story.

It’s what I want. Maybe even what all of us want.

At home, in the shower, I belted out, to the tune of that old Eric Carmen song: “I had that theater ALL TO MYSE-E-ELF.”

Then I burst into maniacal laughter.

P.S. But, seriously. I hope it was a fluke. I hope that across the city and the country, people were showing up for this indie romantic gem of history in the making.